THE ART OF CERAMICS

THE FEATURES AND THE TECHNIQUE

The art of ceramics is born and grown where the particular characteristics of the territory allow easy availability of the materials needed for the processing: the ARGILLA (clay).
The extreme plasticity is the characteristic that made the clay remain the constant element for handcrafting ceramics up to the modern day, although the production techniques changed over time. The hills of Deruta are still abundant with clay, although due to technical problems, clays from other areas are used. The clay that is used is called marly clay because it is extracted from the marls that are easily obtained from the blue-colored rock which consists of limestone and clay in almost equal proportions, these proportions determine the clay type, calcareous marl or clayey marl chemically known as aluminum hydrated silicates.
The element almost always present is iron oxide which determines the reddish color after the first firing. Before being used for processing, the clay undergoes preliminary treatments of crushing, homogenization maturation and drying in heaps.

Maturing consists of exposing the material to frost and rain which consequently results in the crumbling of clods and purification of the clay. The clay is then collected and put in special crushing machinery followed by machines with large cylinders that grind the clay until it has become a homogeneous dough ready to be processed.

Among the various characteristics of the clay, that are decisive in the processing, is the percentage of water that is added to make the modelling easy. An important phase of the processing is the COOKING, which causes a set of physical-chemical transformations giving the object its solidity. There are two firings essential for the production of majolica: the first called “BISCOTTO” and the second “COOKING OF THE BEAUTY”.

The objects after the first firing are coated with a tin and lead-based enamel, to be then decorated with colors based on oxides ground with lead, for example: the green copper (copper oxide), the blue (cobalt oxide ), orange (iron oxide), yellow (iron oxide and antimony) etc. The decoration takes place immediately after enamelling, traditionally with bristle brushes made of either goat or donkey hair but today ox and marten fur are commonly used.

The design on the object is sometimes done freehand, other times preparing some specific typical decorations such as: the rich Deruta, the raffaellesco and the “vario”, but obviously you can give free reign to any pattern. 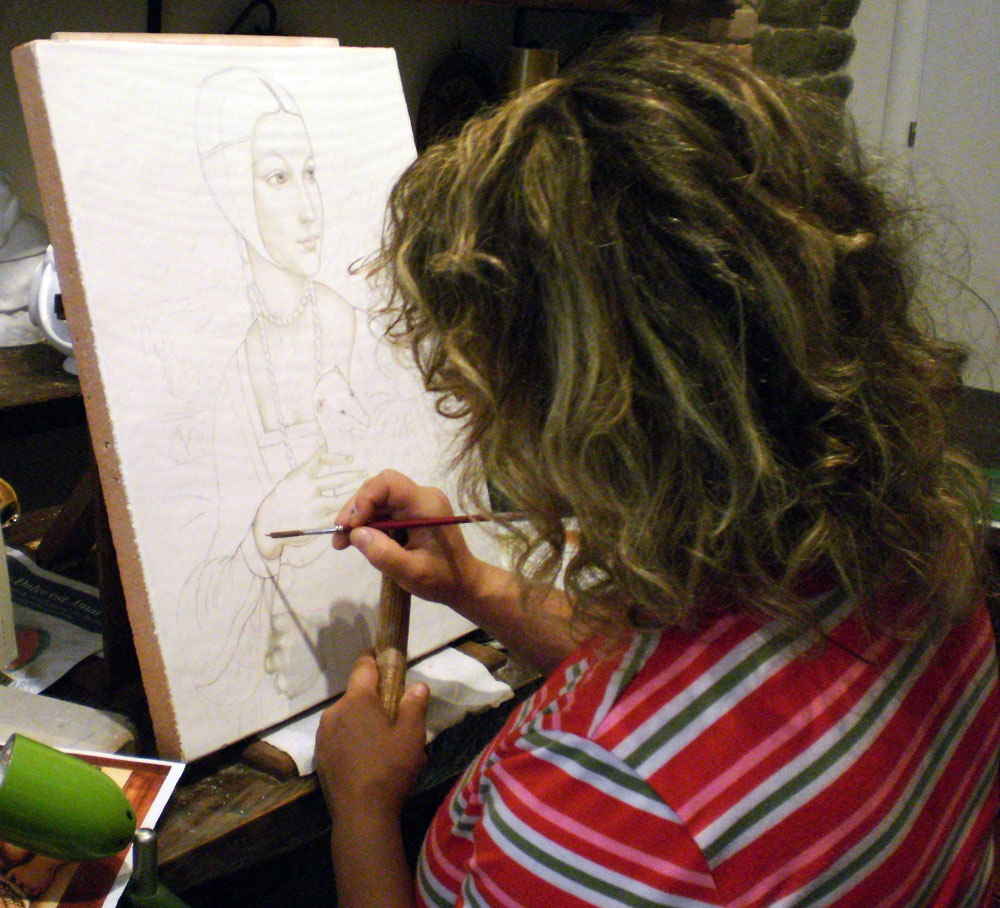 At this point the objects are ready for the second firing. In ancient times they were cooked in wood-fired furnaces built with bricks and made up of two rooms, one for cooking and the other a hearth where wood was burned. Today, gas or electric ovens are used for cooking.

Another technique to remember is the smoke or reverb reflection obtained with particular processes consisting in a metallization process, where a mixture of metal salts and clay are diluted with vinegar and applied by brush to the parts of the object painted in white and blue after the second firing and cooked at about 600 ° C, other substances were also introduced into the furnace along with the wood such as ginestre and nail of the horse to produce smoke.
The smoke causes oxygen deficiency inside the furnace so that the metal salts during the softening phase of the enamel penetrate giving rise to the particular color “gold” or “ruby red”. Obviously the doses of the dough are secret. Remember that the first cooking takes place around 1000 ° C, the second cooking around about 920 ° C and so on for other cooking at lower and lower gradations.

The production of ceramics and majolica in Deruta has centuries-old origins. With the archaic period, a wide production of commonly used objects such as basins, bowls, panate, and pourers begins , with decorations mostly geometric. The main colors used in this period are the “green ramina” and the “brown manganese”.

In the following periods the majolica of Deruta reaches its maximum splendor, especially in the 16th century reaching various Italian cities and even abroad. Artists such as Giacomo Mancini, known as El Frate and Francesco Urbini, signed important works. But also Nicola Francioli, known as “Co”, is an artist of great importance, and signs numerous pieces.

Lavish plates, love cups, stuffed cups, coats of arms, etc. all have various and original decorations. Floral decorations, grotesque, embryonic, peacock feather eye, wolf’s teeth and petal back etc. The colors of the period are richer; in fact we find, in addition to the green ramina and the brown of manganese, there is orange, blue and yellow.

Also appearing is the complex technique of smoke-shine (or reverberation), which gives splendid golden reflections to the work. Also important for Deruta are floor works and pavements such as that of the church of San Francesco (1524) and that of Santa Maria Maggiore in Spello and the sacristy of San Pietro in Perugia, all have evidence and testimony of high quality Deruta majolica. With time, decorations changed, giving life to other more seventeenth-century styles such as the “Compendario”, which is characterized by a fast stroke, and then there came the “Calligraphic” Moorish inspiration with leaves, flowers, arabesques and birds etc.

In the eighteenth century, the ceramic industry entered into crisis. However, Gregorio Caselli, to avoid this problematic era, built a majolica factory to imitate fine porcelain. After the unification of Italy there was a significant recovery of the industry in Deruta thanks to the work of Alpinolo Magnini, Angelo Micheletti, David Zipirovic and Ubaldo Grazia.

The Bottega d’Arte of Gina Pelli with her production of ceramics continues to be an example of high quality achieved in majolica.

We use cookies to ensure that we give you the best experience on our website. If you continue to use this site we will assume that you are happy with it. Read moreOk